Since I offer different Stages of performance, sometimes players order the wrong harp without understanding what they’re buying. “Yeah, sounds good man, I want that! Ummm…..what’s an overblow?”

An overblow is an additional note obtained through advanced technique. Lots of players have never heard of it,  or confuse the term with *blow bends* or simply playing really hard. That’s not the case, keep reading!

Another mistake is assuming that since the higher-priced Stages cost more, they must be higher quality. This couldn’t be further from the truth! They’re all just different tools for different purposes. If you don’t plan to incorporate overblows into your music, the Stage I option is the best tool for the job.

An overblow harp is a fantastic tool that can save you a lot of time and frustration, but there’s absolutely no benefit in paying for that setup labor if you don’t intend to use them!

Please watch these youtube videos that Todd Parrott and Adam Gussow have posted. Make sure you really need or want to go there before ordering a more expensive high-end overblow harmonica.

Adam kicks his off by playing “Alley Cat” on a Spiers custom harmonica. He has a whole bunch of instructional videos on youtube, and has lessons and music available for sale on modernbluesharmonica.com.

Here’s his take on my harmonicas: 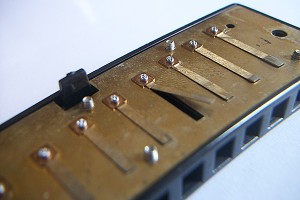 Breaking a 4 draw once in awhile is just a fact of life when you’re a blues harp player, but we can adjust our playing habits to make them last longer. The following advice is just from my point of view as a mechanic.

I don’t think just playing too hard is the only reason we kill them so much. If that were the case we’d blow out other reeds that get played hard and often, like the 2 and 3 hole reeds. I think I’ve replaced less than 5 broken 2 and 3 hole reeds in the last 10 years.

But volume is a factor. When the band is rocking out and we can’t hear ourselves, we tend to play too hard and rely on a few basic licks that we know “work” even when we can’t hear them. Wailing on the 4 draw is one of them.

My advice is….. don’t bend the 4 draw down all the way to the “floor” of the bend so hard/often. When we do that it causes failures, much like bending the 5 draw does. Most of us figure out early on that bending the 5 draw down too hard will wreck a harp very quickly. And we stop doing it so much, even though it sounds cool…. because it costs too much money! To offer circumstantial evidence to back my theory up, I actually don’t have to repair very many 5 draws at all. Because we accept that it’s the player’s fault, and stop doing it. But for some reason, a lot of people blame the harp when it’s a different reed.

It’s basically the same sort of thing here, except we travel through another semitone before reaching that breaking point where something is going to give. The trick is to stop before you reach that breaking point. This applies to every hole, including the 5 draw which you can get away with bending a little once you figure this out.

The “in-tune” pitch for the 4-draw bent note is only about half way to the bottom of the bend. It’s actually kind of hard to control on some harps (which leads to the bad habit of cranking down hard on it), but shouldn’t be on my customs.

The fully bent note on any hole is usually around 40 cents flat of the actual note compared to a keyboard or tuner. That’s very flat! If you record yourself doing it all the time with a band, you might hear that it really doesn’t sound very good most of the time either (there are appropriate contexts). The drunken audience may still go wild, but the musicians you’re playing with probably don’t care for it too much.

Get more gigs because you sound better.

Save money on harps.