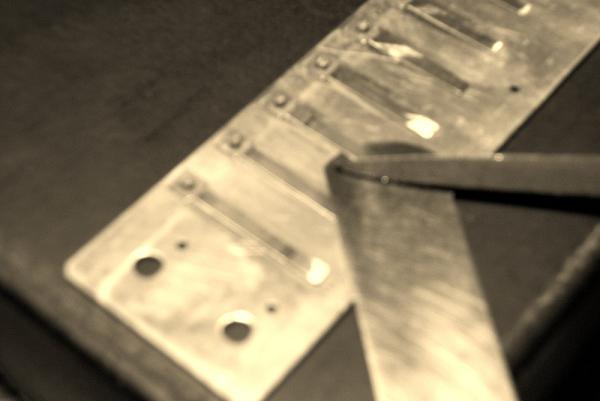 There are a few different ways to tune a harmonica, and no matter how we do it it’s a compromise. There’s no one temperament that’s perfect for all the different ways to play music. It can be confusing the first time you hear or read about it. Sometimes that’s when you order a harp, and if you didn’t provide enough info about your playing style I might ask you how you’d like it tuned. Often your answer is “help me out man, I don’t know!”

So here’s a crash course on what I’m talking about. I’m not getting into the science and don’t have enough time to discuss it with you in-depth. If you have a keen interest in the subject, you probably already know what you want. If you don’t, and/or my crash course isn’t enough info, please visit www.patmissin.com and do your research. He explains things very thoroughly.

Marine Bands and Special 20’s out of the box are tuned with smooth chords in mind. If you value the traditional sound you’re used to with these harps, I recommend staying with that. The 5/9 draw isn’t tuned as flat as they were on the MB’s of the 1950’s, but the rest of it is the same. Basically 5/9 draw are tuned halfway between 7-limit and 19-limit just.

“7-limit just intonation” is what was used on most of the Little Walter era recordings, I believe it was used on all MB’s up until the very early 1980’s. Chords were pure and just, like a barbershop quartet, including the 5/9 draw. But, that smooth chord requires tuning the 5/9 draw very flat. If you aren’t used to it, it sounds different. If you want to sound like the old recordings, then you might want to try it.

“19-limit just intonation” is exactly the same as 7-limit just (as well as regular MB tuning), on all reeds except the 5/9 draw. With 19-limit, the 5/9 draw are tuned about the same as ET, which is sharper than they are on a stock MB. This will usually sound better for 3rd position playing because that note will sound in tune when played on it’s own, while keeping the 1-4 draw chord buttery smooth and traditional.

The Crossover or compromised just tuning sometimes works better for players who play in more of a single-note style, or positions beyond 1-2-3, but still like to use chords sometimes. They aren’t as smooth as just intonation, but they’re not as rough sounding as ET. Stock harps tuned like this include the Crossover, and Suzuki Manji (generally, not exactly, close enough for what we’re talking about).

ET or Equal Temperament is normally preferred by guys who play in positions beyond 1-2-3, do a lot of unison lines with other instruments, and don’t use chords much. This is how the Golden Melody is tuned from the factory, as well as most other Suzuki’s.

What’s an overblow?
Scroll to top